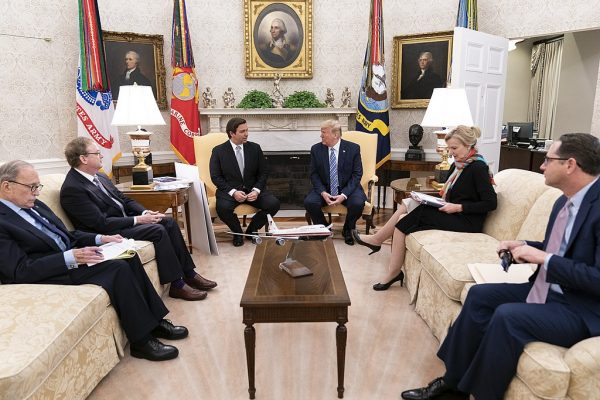 The Florida governor’s office has returned fire on Joy Reid.

Governor Ron DeSantis’ office is fighting back against media allegations that the Florida Republican is making special efforts to recruit unvaccinated policemen from other states and “bring deadly COVID into” the Sunshine State.

“Tonight’s ‘Absolute Worst’ is now actually paying to bring deadly COVID into his state. ‘Come to me, COVID,’” said Reid. She then voiced a parody recruitment commercial that offered law enforcement officers from the other 49 states the chance to kill Florida’s senior citizen population:

Joy Reid misrepresented the facts of Ron DeSantis’ offer to bring seasoned law enforcement agents to serve and protect his state, which had nothing to do with vaccination status, the governor’s office says.

“The facts speak for themselves: Governor DeSantis announced this initiative back in August at the Fraternal Order of Police conference, as part of a package of proposals to recruit law enforcement officers from out of state. Vaccine mandates weren’t part of the conversation back then, and vaccination status wasn’t mentioned at all in the governor’s announcement,” DeSantis’ press secretary, Christina Pushaw, told The Daily Wire.

The insanity from the media shows that their fear of DeSantis is at an all-time high.

Knowingly telling an untruth has always been a sign of weakness and desperation. Clearly Joy Reid is in panic mode!

Joyless Reid is a dyed-in-the-wool progressive and a lover of lies. That makes her a hater of the truth and those who speak the truth. Never fear: the Lord has a special place for those who love a lie. Quoth our Lord: ‘He who hates his brother does not know me.’

joyless needs to be cancelled…she is one of the biggest racists out there, takes up after ovomit I guess

The demonrats people are generally unhappy & expect everyone else to be unhappy as well.!!! They weaponize the word racist and white supremacy.!!! Brain dead dems.!!!

Our good friend had the third dose of the vaccine and always wore a mask indoors so he thought he was SAFE! He got Covid anyway and passed it on to my husband, who was also vaccinated and got a mild case. This showed the lie that vaccinated people don’t spread Covid and don’t get Covid! Vaccines don’t stop the spread, and mandates don’t either, especially for young people who have had the disease!!

I do not think any medical person has said that vaccination stops the spread, only that it stops the severity of the disease.

You are right…YOU DO NOT THINK…everything I have seen say to ‘stop the spread’ !!!!
Also, if this air-borne Virus is so deadly, where are all the dead birds !!

Do people actually watch that pile of crap?

Well we know who Joy Reid’s biggest worry is in 2024, but that doesn’t say much because she is not the brightest bulb on the tree.

MSNBC is a criminal enterprise that creates false news in support of their friends in China. It is time to have a free and independent US press, with foreign revenue considered a conflict of interest.
Please join me in prayer that God strikes down the enemies of One Nation Under God.

Reid and the truth and have never been introduced to each other. Just another wannabe trying to sound important.

good common sense people that have faith in God dont have the evil in them to sceme and do harm to others, they mind their own business help their neighbor in need , that joey reid has a reckoning coming thats not gonna be pretty! and people like her also. They have really forced good people to change their hearts and its coming a time to cause bodily harm to these people to stop this crap before they ruin this country!!!!!!!!!!!!!!!!!!!!!!!!!!!!1

So Biden can bring all the illegals across the border, with no screening, no vaccines, and spread them throughout 70 or 80 cities nationwide, and that’s OK?! This federal lawlessness has to stop, it’s rotten from the top down! O’Biden is pathetic!

Gee… there’s a surprise… NOT! Joy Reid is a partisan hack!

Now you know why the CHEATER Criminal Democrat Party Mob leadership, has a ‘JACKASS as it’s party mascot, she is its shining example for the political party”!!!! HEE-HAW, HEE-HAW!!!!!!!

Biden flying illegals into the state with covid and now all of a sudden she wants to act like she is worried about the pandemic spreading to Florida ?

wpDiscuz
22
0
Would love your thoughts, please comment.x
()
x
| Reply
You are going to send email to
Move Comment