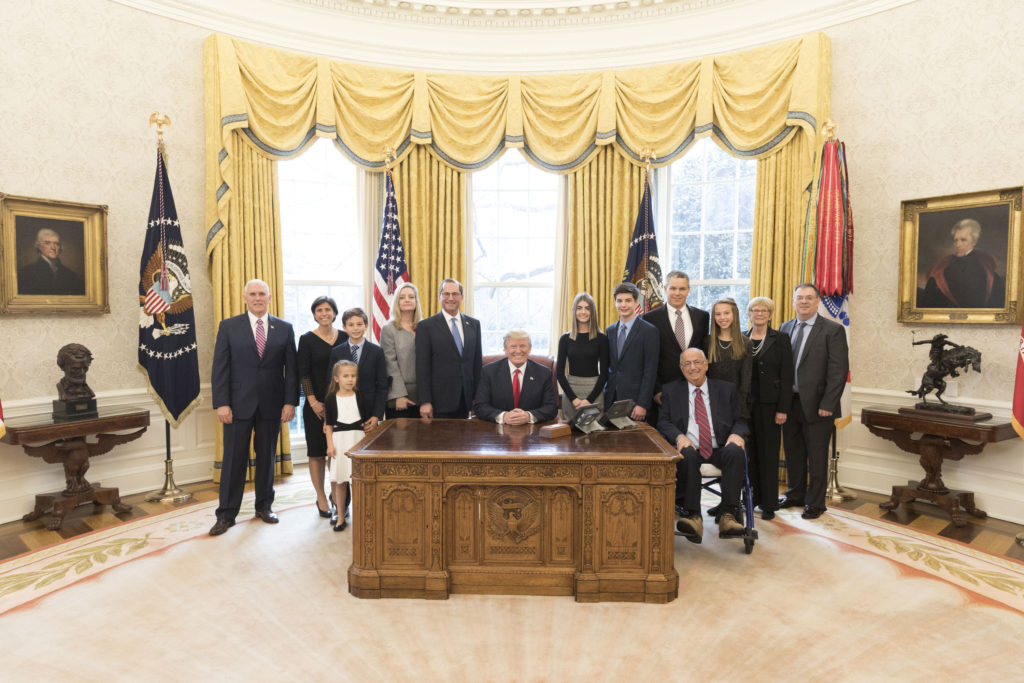 “We will build gleaming new roads, bridges, highways, railways, and waterways all across our land. And we will do it with American heart, and American hands, and American grit.”

STIMULATE INFRASTRUCTURE INVESTMENT: President Trump’s plan will lead to at least $1.5 trillion in investments to rebuild our failing infrastructure and develop innovative projects.

INVEST IN RURAL AMERICA: Rural America’s infrastructure has been left behind for too long, and President Trump’s plan will make sure it is supported and modernized.

INCREASE STATE AND LOCAL AUTHORITY: President Trump’s proposal will return decision-making authority to State and local governments, which know the needs of their communities.

ELIMINATE REGULATORY BARRIERS: The President’s plan would eliminate barriers that prevent virtually all infrastructure projects from being efficiently developed and managed.

INVEST IN OUR COUNTRY’S MOST IMPORTANT ASSET – ITS PEOPLE: The President is proposing reforms so Americans secure good-paying jobs and meet the needs of our industries.

I think President Trump could be the greatest president ever.I don’t see how anyone would want to be a democrat and actually believe in there anti-American ways.I love the people as Americans but by trying to stop everything President Trump is doing we will never see America great again.

Bravo President Trump!! It’s about time a “business man” take care of the “business” of our country. Under budget and ahead of schedule that’s America’s new motto. Thank you for your sacrifice to help our country and ALL Americans.

Lets just pray that enough Democrats have seen the light and will vote to back up the presidents ambitious plan to save America from the Globalist horde. Should he lose office all the good will disappear and the globalist will have won. This will be a battle for the heart and sole of America.

I support MY PRESIDENT TRUMP and VP PENCE 100%! Those who ATTACK my President or VP or their families are TRAITORS who deserve DEATH! No DACA! MAGA! THANK GOD for TRUMP and PENCE! MAGA!

It is important that the monies that are transferred to the State coffers be identified as the source-funding of the State-Directed Projects. No State Representatives should be able to take the credit for projects funded by the Federal Infrastructure Project. Any State-funded/Federal Funded Projects should be identified by the percentages each entity contributed. That way, the credit for any improvement… and the responsibility of managing those funds…. can be accurately assessed by the public.

One of the biggest obstacles to the success of this Trump plan is our established cronies in the state government and in Washington, entrenched Congress members who are too accustomed to corruption and misuse of tax dollars. Americans must consider replacing the old politicians with a new breed of a government administration. It’s time to clean out the garage and the attic and replace with real intelligent Public Servants. I know God would approve and in the end that’s what is really important.

I fully support President Trump,s agenda, He has done so much to save America, I am thankful that he has been appointed by God to be our president, God raises up leaders and takes down leaders according to the Bible. I am diligently praying that our State of California will be saved from the corruption of our leaders, they are definately led by demonic influence. It is truly sad because California is a beautiful state but is being destroyed by these evil people that want to chase out the people that will challenge what they are doing in order to develop servants of the illegals and they can Lord over them.

Congtats, Mr President: That wall , the idea of it, sounds better all the time. When it’s done, I’d like to have a picnic somewhere along it just to celebrate and to reflect on just how far we are coming in making America great again and also in making America AMERICA again. We don’t want illegals that sop up so much of our money, energy, and devotion to our country continuing to think that they are entitled to a free ride at our expense.
No more chain migration, lottery visa, or visa overstays. ICE is ready, willing, and able for action, and they have our support.
And let’s crush the seditious politicians who are sponsoring sanctuary cities. They are unworthy of American citizenship.

I applaud all programs listed and the efforts of this administration. President Trump has accomplished more than any other President in modern history and I personally thank him for his own and his family’s sacrifices. I only caution that because “GREED” corrupts, that we “MUST” have checks and balances for all of these new programs, otherwise waste, fraud and corruption will run rampant and replace all the good these programs will be doing. We must support more of judicial watch’s efforts and others who watch bad business ethics and bad actors who are out to line their own pockets or destroy this agenda at any cost, not to mention countries that “also” do not want these programs to succeed I only ask that folks remember and act as there are still thousands of people and some countries who are out to continue to sow discord in anything Trump and that means belittling or attempting to destroy their own countries successes if needs be. Also must remember Soros, he is behind making sure the USA “DOES NOT” become financially stable again, so we have his billion dollar liberal, progressive and socialist support monies and antics to deal with also in our country, (or until he is removed as a foreign national should be or be held for high crimes and treason as a not to recent citizen should be). It is time to send these bad actors packing and back under the rock from whence they came, but they are sneaky and only vigilance and the rule of law can prevail over them. PERIOD!