President Trump has announced that his administration will begin withholding funds from sanctuary cities following a court decision that ruled in favor of them doing so. According to The Hill: President Trump on Thursday said his administration will begin withholding funding from self-described sanctuary cities after a federal court ruled last week that it could do
Read More

WHAT: The violent animals of MS-13 have committed heinous, violent attacks in communities across America. Too many innocent Americans have fallen victim to the unthinkable violence of MS-13’s animals. At the State of the Union in January 2018, President Trump brought as his guests Elizabeth Alvarado, Robert Mickens, Evelyn Rodriguez, and Freddy Cuevas, the parents
Read More

By 1600 Staff White House Press Secretary Sarah Huckabee Sanders had some choice words for a reporter who was asking about the president’s comments the day before referring to MS-13 as “animals”. Reporter:  “I just want to ask you, because so many people around the country have been talking about it in the last 24
Read More

WHAT: Communities are coming out against reckless sanctuary policies and in support of our Federal immigration laws that protect the American people. Sanctuary jurisdictions continue to hinder Federal immigration enforcement efforts. These jurisdictions often refuse even basic requests for information, such as notice to Federal officials before the release of certain criminal aliens. California has
Read More 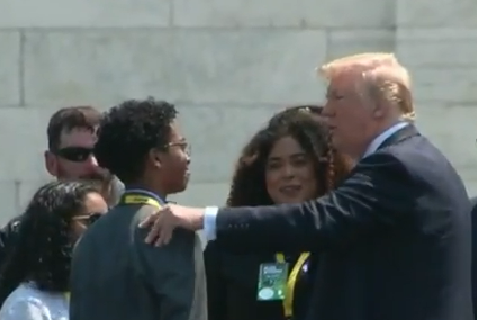 By 1600 Staff President Trump did not mince words towards the criminals that are endangering Americans and killing police officers: “We believe criminals who kill our police should get the death penalty — bring it forth,” he said. “We must end the attacks on our police and we must end them right now.” The president called
Read More

By 1600 Staff In early 2017, Public Radio International reported that 92 percent of Americans live in sanctuary jurisdictions. During the Obama era, the number of sanctuary jurisdictions grew by 650%. President Trump vowed as a candidate to end sanctuary cities, and it appears that in spite of stiff resistance, it is happening. The Federation for
Read More

WHAT: Loopholes in our immigration system created by judicial rulings have made it nearly impossible to remove many criminal aliens. In drafting the Immigration and Nationality Act (INA), Congress included that criminal aliens convicted of any number of serious offenses referred to as aggravated felonies should be subject to immigration consequences. Federal courts, however, have
Read More