Cabinet Secretaries, Members of Congress, and State officials all agree that now is the time to rebuild and reinvest in our Nation’s infrastructure. SECRETARY OF TRANSPORTATION ELAINE CHAO: It’s Time to Invest in Our Country’s Future “The [Department of Transportation (DOT)] is already making progress in reducing the red tape that is holding back so
Read More

“Our rich and abundant soil provides for more than just sustenance—it provides a beautiful and bountiful way of life for millions of Americans.” President Donald J. Trump’s 2018 National Agriculture Day Proclamation One in 12 jobs in the United States is dependent on agriculture, according to the Agriculture Council of America (ACA). From farmers to
Read More 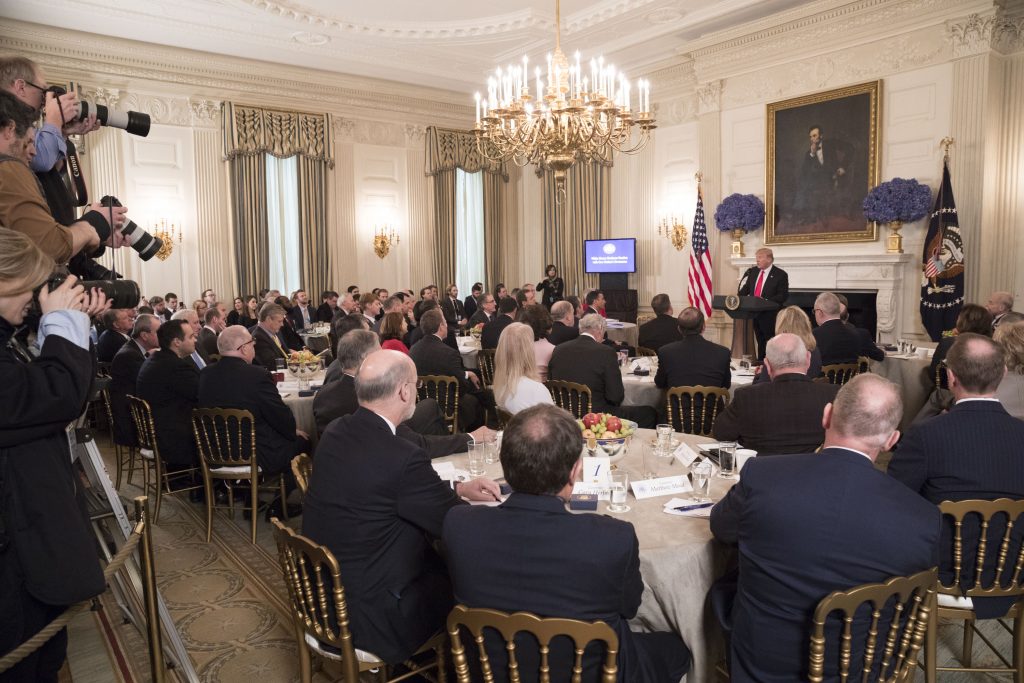 State Dining Room 10:53 A.M. EST THE PRESIDENT:  Thank you, everybody.  Thank you very much.  And I want to thank our Vice President for that really lovely introduction.  That was very nice, Mike, and I appreciate it. This is a time of great opportunity for our country.  We’ve created nearly 3 million jobs since the
Read More

Welcome, governors  This morning, President Donald J. Trump is welcoming about 40 of the Nation’s governors to the White House for a business session covering infrastructure, workforce development, opioids, school safety, and other important issues facing America in the year ahead. The governors are in town for a winter meeting of the National Governors Association,
Read More

Farmers, ranchers, foresters, and those in rural America know that the U.S. economy is booming once again, however, they also know their local byways, small towns and farmlands have not kept pace. A task force created by President Trump developed recommendations for promoting prosperity in rural America, and one of its key recommendations is
Read More

Let’s invest in U.S. future By Secretary Elaine Chao Orlando Sentinel February 15, 2018 President Donald Trump has announced a bold, innovative plan for improving and investing in America’s infrastructure. The proposal is the culmination of a year-long effort between Cabinet agencies, including the Department of Transportation, with significant input from state, local, and private
Read More

As President Donald J. Trump unveiled his infrastructure plan this week, one question dominated the political debate — how can $200 billion in federal investment grow to $1.5 trillion? The federal government historically has played, and should continue to play, an important role in developing infrastructure in our Nation. However, the vast bulk of infrastructure spending in
Read More

Issued on: February 13, 2018 “No longer will we allow the infrastructure of our magnificent country to crumble and decay.” President Donald J. Trump INSUFFICIENT INFRASTRUCTURE: Years of inaction have allowed American infrastructure to degrade into a state of disrepair. Infrastructure in the United States struggles to meet the needs of the American public. The American
Read More