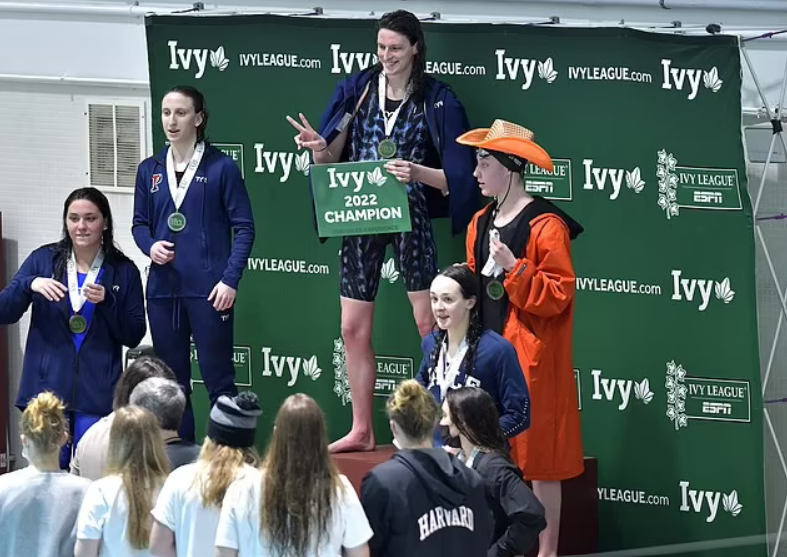 Transgender swimmer Lia Thomas set a pool record at Harvard and beat the next closest swimmer by 7.5 seconds. Thomas is scheduled to swim the 200 freestyle and either 100 or 1,650 freestyle later this week. None of the swimmers were available to the media after the race.

In January, the National Collegiate Athletic Association pledged to follow each sport’s governing body when it came to rules for transgender swimmers. However, when USA Swimming released a stricter set of rules following backlash as a result of Thomas’ times, the NCAA said it would not enforce those rules until after the current season. That decision allowed Thomas to swim in the Championships.

Fellow transgender swimmer Iszac Henig, who is transitioning from woman to man but has not begun taking hormone treatments, also set a pool record and won in the 50 freestyle. Iszac, who uses male pronouns and has had breast removal surgery, swims topless while wearing men’s swimming briefs.

Controversy continues to surround the inclusion of transgender athletes in women’s swimming competitions. 16 of Thomas’ teammates issued a letter asking the national organization not to allow transgender athletes to compete. That letter refuted another letter which claimed to speak for the majority of the team assured the public that Thomas had support. The swimming world quickly sought signers for a fourth letter to support Thomas, the vast majority from other schools and former athletes who no longer compete. The NCAA has not addressed any of the letters.

HE broke no records, swimming against females. He is a He, that can’t be changed. That’s Science, but the Science that politicians don’t like. He is a He, but with a mental problem. He fits right in with the Dem. and all the other unbalanced people, in that Party.

This AIN’T no woman. What sort of a coward who cannot score among men, would switch his hormonal allegiance to approximate a woman to get over on genuine females? Decades of testosterone facilitation of muscle tissue and strength cannot be undone by a few months of puny estrogen excuses for human biology.

This looks like a man to me so this is nothing for him celebrate. These young don’t stand a chance after all their years of hard work, it’s pathetic. God, this world is a freak show makes me just sick.

just because some so called “SCIENCE” proves their minds are different does not change their DNA. physically they are male and female just like any other person.

so why make a special category or give special accommodations or “EXTRA classes.. just have them compete in regular competition in their respective BIOLOGICAL DNA SEX they are born with. you know. like normal people. we don’t want to make anybody feel different..

They need their own category because they have shown they are incapable of competing against other males. They need a separate category for disfunctional males.

They are all Dirtbag cowards. Let them start a transgender league of their own but kick them out of women’s sports! They don’t belong! When is the public going stand up to these misfits?. Since when does a minority (5%) get to make the rules for the rest of us???

HE should sw with the big boys.

So proud of HIM! Needs help!

There are over 13 States that already ban men from competing in female sports. I AGREE…………

He is not breaking any records. He is a man beating women. Duh. Of course he’s winning. This is all just so completely ridiculous.

It amazes me that science is being completely ignored when it vines to gender, but worshipped when it comes to C19 and it’s vax. If you refute the claims of C19, you’re called a science denier, but the same people using that term to label legitimate objections to all the C19 claims are the same people who deny science by claiming there are more than 2 genders. And then you have this ridiculousness going on.

Men are men, no matter what they cut off or how long they grow their hair. Of course he’s beating the women, what a joke to even consider that his name shouldn’t have an asterisk next to it. The real winner is the first real woman to cross the finish line after him. She’s the one we should be talking about. Because to call a man the women’s champion is just ridiculous. ,

does lia still have a wong? if so then shehim is not a transgender

As ole Gildersleeve would say- What a revolting development this is. He should be check for balls. If he has some, he’s disqualified.

The only ones more mentally and delusionally disturbed than Princess Nuts are the ones permitting him to go along with all the insanity.

It’s unfair and needs to be stopped. It is not a record. It is a manipulative way of cheating.

biological female swimmers, YOU need to stop this, quit swimming with the boys, period…your voices will be louder than…QUIT SWIMMING WITH BOYS, you won’t win

Exactly! There is no way a female body can compete with the muscular and skeletal design of a male. Guys can have every appendage cut off including a nose but they still have the body of a male. The lung capacity of a male is greater. Those traits make for excellent winners in any sport when competing with female bodies.

DEAR FEMALE ATHLETES – QUIT COMPETING WITH THIS MENTALLY DISTRUBED MEN. If you don’t compete, there is no event! No race! No results! TRUST ME; BOYCOTT! Your voices WILL be heard.

This swimmer didn’t set any record. It is a WOMEN’S swimming record and only a woman can set a new record.

wpDiscuz
22
0
Would love your thoughts, please comment.x
()
x
| Reply
You are going to send email to
Move Comment