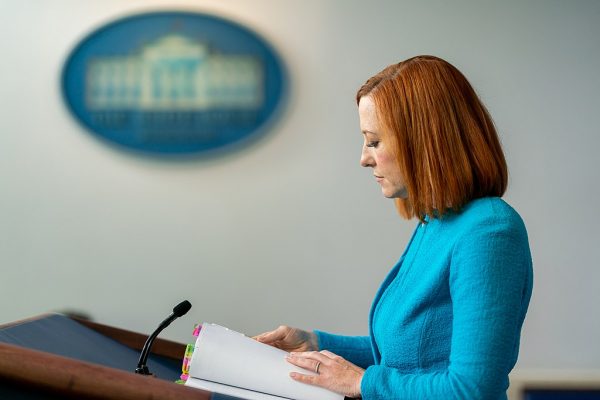 on White House Press Secretary Jen Psaki pauses for a moment as she addresses reporters on Thursday, April 15, 2021, in the James S. Brady Press Briefing Room of the White House. (Official White House Photo by Cameron Smith) via Wikimedia Commons

White House Press Secretary Jen Psaki was apparently “out of office” while Afghanistan descended into chaos.

White House press secretary Jen Psaki is “out of the office” this week as the Taliban executes its takeover of Afghanistan, according to automated messages her office has sent to media organizations.

Fox News attempted to reach Psaki for comment on Sunday—the same day the Taliban seized Kabul, Afghanistan’s capital city. Psaki’s email returned an auto-reply that said the press secretary would be “out of the office” from Aug. 15-22.

President Joe Biden, who is on vacation at Camp David, has been silent on the Taliban’s takeover. Biden is expected to return on Monday to Washington to deliver remarks on the crisis, according to CNN.

The White House’s sole acknowledgment of Kabul’s capture came Sunday, when it released a photo of the president sitting alone while participating in a video call with national security officials to discuss the “ongoing security situation in Kabul.”

Republicans have slammed Biden for being on vacation during the chaos.

SHARE THIS WITH YOUR FRIENDS:
Tags:Afghanistan, Jen Psaki, Joe Biden

Biden Blames Trump, Basement Joe, to all the American people, I’ve returned, The buck stops with me,,, or Hunter, as far as Afghan is concerned that’s all Trump’s fault, no questions, because we have no answers, surprise, surprise surprise, as you can tell by the photo taken at Camp David “we decided to take this action”, where are the others?

The Democratic Party of losers.

She’s just a puppet that speaks. Has no credence at all.

LISTEN UP….The BLESSING of GOD is STILL with PREZ TRUMP. BIDEN’S WAYS are NOT GOD’S WAYS. GOD Chose PREZ TRUMP to Be PRESIDENT of the U.S. Not PREZ BIDEN. AMERICAS FOREFATHERS were WISE to Put GOD First. From SamuraiQueen. 😄😄😄

Too bad she came back. She’s painful to watch when all she says are lies and her lyin’ words all up-pitch at the end.

Guess Pissaki has more intelligence than our Intelligence Agencies – she knew the Bite Me Administration was creating a disaster and she couldn’t face the public and lie about what a great plan the Idiot-In-Chief had implemented.

That’s great. Now I’m sure she will be replaced with someone even worse.

Maybe John “Tales from the Crypt” Kirby; the talking cadaver.

Why does anyone ask this joke and liar anything?

Shucks. I thought the Imbecile-in-Chief was in an interrogation room. However, since questions aren’t permitted, perhaps he’s rehearsing his lines.

The best, most honorable thing poor Psaki has ever done…quod erat demonstrandum.

Psaki was out busily trying on her new burqas.

Democrats are nothing but cowards. If Trump had done this the media would be all over it, but since the media is scum not a peep.

Gee It Is NOT as If she ever spoke a true word, or had an answer to a legitimate question on the subject immediately at Hand

CHEATER Joe Biden “selling out the American people to every world Dictator showing how weak and incompetent he is and this proves it”!!!!!!!

Embarrassed all to hell.

Hidenbiden,austin,milley, and all other sockpuppet, minions needs to be removed for total incompetency. Your incompetence, has trapped 15.000 or more americans, and 30,000 allie Afghanistians, outside the airport, trapped by the taliban. How in the hell, are u going to get them out. U have no plan, your incompetence shows what an embarrassment, hidenbiden, and incompetent generals, this is a horror show,if the taliban start killing americans, it will be all bidens doing.

Psaki Is The Wrong Person In Office With The Rest Of These Democrats . Look How Hunter Biden Selling His Lab Top With Secrets In Them To Terrorist For Drug Money . How Much Is The Terrorist Paying Psaki And Biden And Obama , Harris And Pelsoi And Omar . Just Like The Mexican President Has Got Millions Of The American Tax Money For Illegals . Each Democrat Should Be In Prison For Treason And Being Traders To The USA

The REALLY unfortunate part about this mess is that the ONE MAN who can put Humpty back together can’t touch this mess for three plus years. If Biden resigns, guess what — HARRIS (ug). The ONLY quick solution is impeachment (maybe twice) and a republican house elects Trump speaker. Even this would take two years — we, as a Country, are in deep yogurt. The Chinese will be moving on Taiwan soon and ‘old’ blood and guts will be “out to lunch” again !! I’m afraid things are going to go from bad to worst — quickly!!! You know, you just can’t make chicken salad out of chicken s**t.

I wouldn’t follow this man across the street, much less call him my President. He is a coward and a turn coat. Get him gone.

One of the custodians in the White House should speak to the nation about the state of affairs in government. They couldn’t be any worse than any of the talking heads we have to suffer through, and they would absolutely be more trustworthy.

This was all done on purpose so they can bring in more muslims and terrorists into this country.

I really wonder how much money cost us taxpayers to pay this moron? Is she this stupid, or they paying her to make imbecile of herself each and every day so perv Biden and Willy Brown Ha look better.
I any case does not work, they are just 3 stooges.

wpDiscuz
26
0
Would love your thoughts, please comment.x
()
x
| Reply
You are going to send email to
Move Comment