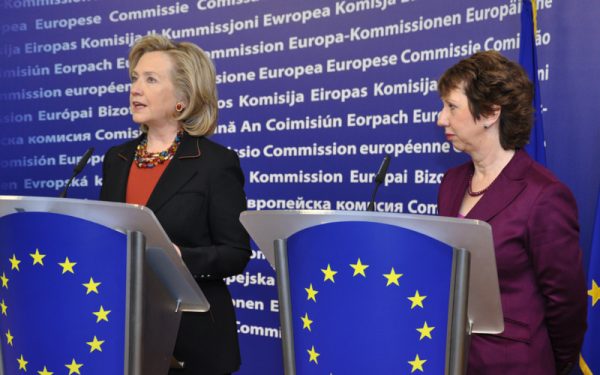 The push of the progressive left agenda by the Biden Administration has a new fan. Hillary Clinton.

Clinton was prompted by CNN’s Fareed Zakaria, who asked, “I want to ask you about Biden’s 100 days. And I want to you ask something very specific about it which is, he has outlined a much more ambitious role for the government than people thought Democrats could or had the courage to. Your husband famously said when he was president, the era of big government is over.  James Carville, who ran his campaign, said what I realized now is when I die I want to come back as the bond market because everybody here is so worried about any spending that would upset the bond market. Was that all wrong then or is it that Biden is in a new age?

“I really think it’s a new age and in part because what had to happen in the ’90s did happen,” Clinton replied. “There was a lot of, you know, positive economic growth that was aided and abetted by government policy and huge amounts of advancement for people up and down the income scale, minorities and others. In the Obama administration, the biggest expansion of health care that could happen.”

“But it wasn’t until the pandemic that I think a truly working majority of Americans, crossing party lines as we’ve seen, because of the approval that Republicans and independent voters are giving Biden, suddenly understood in a clear way that, you know what, there’s lots of times when we need the government, and we’ve been exposed as lacking in the kind of investments and support that we, as Americans, should be providing each other with the government as our partner,” she continued.

Clinon enthused, “And I’m thrilled that President Biden is taking advantage of this moment to try to push the agenda as far as possible. I think both, you know, Presidents Obama and Clinton did, too, but they were more constrained given what the climate was politically during their administrations. So, yes, I think it builds on a lot of what did happen in prior Democratic administrations. But it also goes further. And it can go further because people understand, guess what, you know, we kind of were failed by our government for four years when we confronted one of the worst health care crises, economic crises that our country has seen.”

When asked about former President Bill Clinton’s Treasury secretary, Larry Summers saying Biden’s spending proposals are too much Clinton stated that she isn’t worried about it… just yet.

Are we really sure that is her? Haven’t seen her much and now the “mole pops her head’ out !

When the Democratic Party allow Hillary to voice an opinion on ANYTHING you know that they are desperately in trouble.

When the Democratic Party allows Hillary to voice an opinion on ANYTHING we are all in desperate trouble because she doesn’t have the well being of America at heart.

F_H_U_I_C_L_K_A_R_Y!!!! The government and the uber rich media are the problem – they control this country while they get richer by the billions and inflation and taxes make the taxpayers who pay for all this stuff everyone wants for “free” poorer or out of biz!

Hildebeast,please go back to the woods, no one is interested in anything, u have to say, three time losers like u, we like to kick to the curb.

It’s not the real Hillary!

Horrible Hillary back on the stump again? I know if she was offered just a glimpse of hope she would be back on the stump, but, I think even she knows her hopes are over. I have lost all respect for the Democrat party since they offered up such an obvious criminal to the presidency and expected decent people to vote for him. I have followed Joe Biden’s career since he graduated law school. Even before he graduated he had already committed the crime of plagiarism, almost losing his law degree.
He managed to talk his way out of that first one. The second one he was caught at cost him the election against Dukakis and gave us George W. Bush. Since then Biden has been busy building the Biden Crime Family with two brothers and a sister. All involved in questionable deals. The Biden Crime Family is not just a book. Apples fall close to trees and Hunter Biden is not only a criminal he’s an addict and according too pictures on his lap top, possibly a pedophile. I don’t know about the stroking arms and sniffing hair of little girls that Joe is so famous for but there is a court order against Hunter to stay away from his niece.Only a slug like that could write a memoir and call it, “A Beautiful Thing?.

Ask Kamala Hillary! She at least made VP. She might give you some pointers. Ah, at this point, what does it matter? We should pray! Don’t you think?

give her a jug and tell her to shut up

A white wine pipeline into her Chappaqua estate!

Who cares what this old hag says, go home Hillary and crawl into your hole!

Lokk a t her ears. Is that Hillary?

And if Hitlery had won in ’16 the Commiecrats woulda had four years head start on this mess.
The vomit rises at the mere thought…

Is she hoping senile Joe will give her a government position??? Laughable.