The Marine Corps has clarified that the Marines who appeared on camera during a naturalization ceremony, that took place at the White House and aired during the RNC, were on official duty.

The two Marines who appeared in a video that aired Tuesday night at the Republican National Convention were on official duty at the time the footage was filmed, the Marine Corps said Wednesday.

At issue is a video of a naturalization ceremony that President Trump presided over that was aired during Tuesday night’s convention programming. The beginning of the video shows two active-duty Marines in uniform opening the door for Trump as he walks into the room.

“The Marines in the footage of the ceremony at the White House were at their assigned place of duty,” the Marine Corps said in a brief statement Wednesday. “Their official duty is to assist the president in office; those duties include opening doors for the president.”

“The president held a naturalization ceremony and pardoned an individual which were official White House events,” a White House official said in a statement. “The White House publicized the content of both events on a public website [Tuesday] afternoon, and the campaign decided to use the publically available content for campaign purposes. There was no violation of law.”

The Army has launched an investigation over soldiers who appeared in uniform during the Democrat National Convention last week.

BOSS LOVES THE TROOPS. DON’T FORCE THE CORPS TO TAKE THE KNEE FOR COMMUNISM. REMEMBER THE FROZEN CHOSEN.

Has the media forgotten how obama ABUSED the Marine Corp, when he had them standing out in the rain to hold umbrellas while he made a speech, and how many times did obama just walk by a member of the Military without returning his salute? 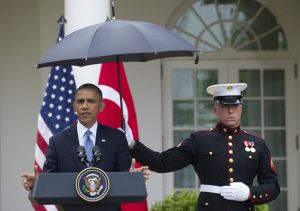 Agree! Though IMHO it should have been him holding the umbrella over the MARINE!!!!

Our Queen holds her own brolly!!!

WE FORGET NUTTIN. OBAMA PAID IRAN 158B TO KILL MARINES. REMEMBER WHEN HE JIM CROWED NETANYAHU?. MADE HIM LEAVE BY THE BACK DOOR PAST THE GARBAGE. OUR FIRST COMMUNIST PRESIDENT.

Same people who respond negatively are the same ones that do not like the military in general. God bless our services.

The poor misbegotten Democrats are just looking for something (anything) to blame Trump. It’s reached the point of mass Democrat delusion, but organized with a PLANNED objective of keeping Trump on the defensive every day until election day. That way the DEM(ON)S won’t have to defend their indefensible treasonous behavior against our elected President, Donald J. Trump, since at least 2016. Obviously they want to divert US citizens’ attention away from a mentally incapable and incoherent Joe Biden, and also from the CRIMINAL investigations currently starting to shed light on what they’ve been actively plotting, and acting upon, since 2015!
So, citizens, DO NOT ALLOW YOURSELVES TO BE DIVERTED FROM THE FACTS AND THE TRUTH!
I suggest Trump and his advisors not even respond to the trash accusations being thrown into the fray by disloyal pre-Socialist/Progressive Americans – using the current Democrat Party for cover!