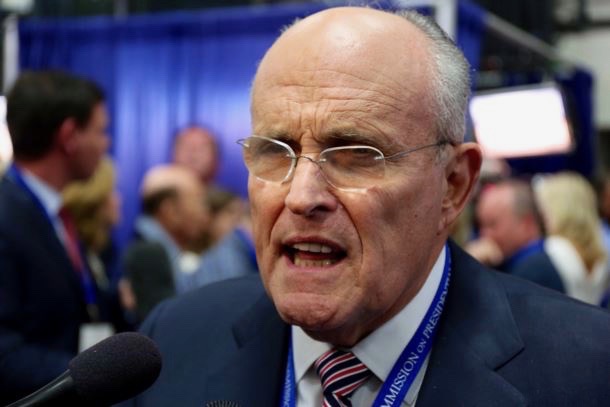 The White House has pushed back at former Rudy Giuliani associate Lev Parnas’ claim that the Trump knew that there was a scheme to get the Ukraine president to announce investigations.

The White House on Thursday dismissed allegations from Lev Parnas that President Trump was aware of a scheme to get Ukraine to announce investigations into his political rivals as a media blitz from the indicted businessman threatened to shake up impeachment proceedings.

Parnas, a Soviet-born businessman and former associate of the president’s personal attorney Rudy Giuliani, turned over evidence to House investigators that detailed the pressure campaign against Ukraine and alleged in an interview late Wednesday that Trump was fully aware of the efforts.

In response, multiple White House officials attacked Parnas’s credibility, accused him of seeking attention on anti-Trump media outlets and pointed to Trump’s denials that he knows the businessman despite the two appearing in photos together.

“This is a man who’s under indictment and who’s actually out on bail,” press secretary Stephanie Grisham said Thursday morning on Fox News. “This is a man who owns a company called Fraud Inc., so I think that’s something that people should be thinking about. We’re not too concerned about it.”

The White House is pointing out how Parnas is desperate and will do anything he can to get a better deal.

An undated note from a guy indicted on multiple federal charges of fraud and conspiracy who's already fabricated evidence in a desperate attempt to get an immunity deal from Schiff and Pelosi so he can avoid prison? That's the new smoking gun? LOL. https://t.co/xnnEsZUqo1

SHARE THIS WITH YOUR FRIENDS:
Tags:Giuliani, Parnas, Trump, Ukraine

WOW!, Another left attempt at political failure. Wake up Citizens! (not most who read here!)
IT IS REALLY SAD, that people cannot think for themselves. Try to come up with anything of proof, from the left’s 3 year excoriation of OUR PRESIDENT. There hasn’t been a shred of proven evidence of any crime. What is the most worrisome thing, is so many people asleep in the lefts’ matrix of lies.
STOP being sheeple. STOP and think things you hear, through. I CHALLENGE any doubter, to listen to the X-22 Report on u-tube, for one week. Dave gives some very pertinent information, that WILL challenge what you think is the “left’s truth”. This could be the wake up call, that will change your outlook, on the future of this country, if WE, THE PEOPLE, make the wrong decision, by being lazy citizens!

I didn’t see any signature on the note. Maybe I wrote it.

Ahhhhhhhh, let’s look at it this way. Who was at the Ritz Carlton, in Vienna and when?? As far as I’m concerned, this guy offers up evidence likes Child’s Play. Left him a Twitter message, and plainly stated, “Which Garbage Bin did you get this stuff from?
Sorry, Mr. President, this is exactly how any ‘rational’ American would see this stuff. No name(s), date, signature?? The guy’s off his rocker.

No this guy is playing the game trying to get his bacon out of the frying pan. But the real off the rocker is the House Dem leadership and the leading nut is Pelosi who is so full with her delusions & fantasies and now she has corrupted the Constitution. Lets see if the Senate will play her delusional game. The American people are the real looser in this saga and for generations the American political landscape will have been changed forever.