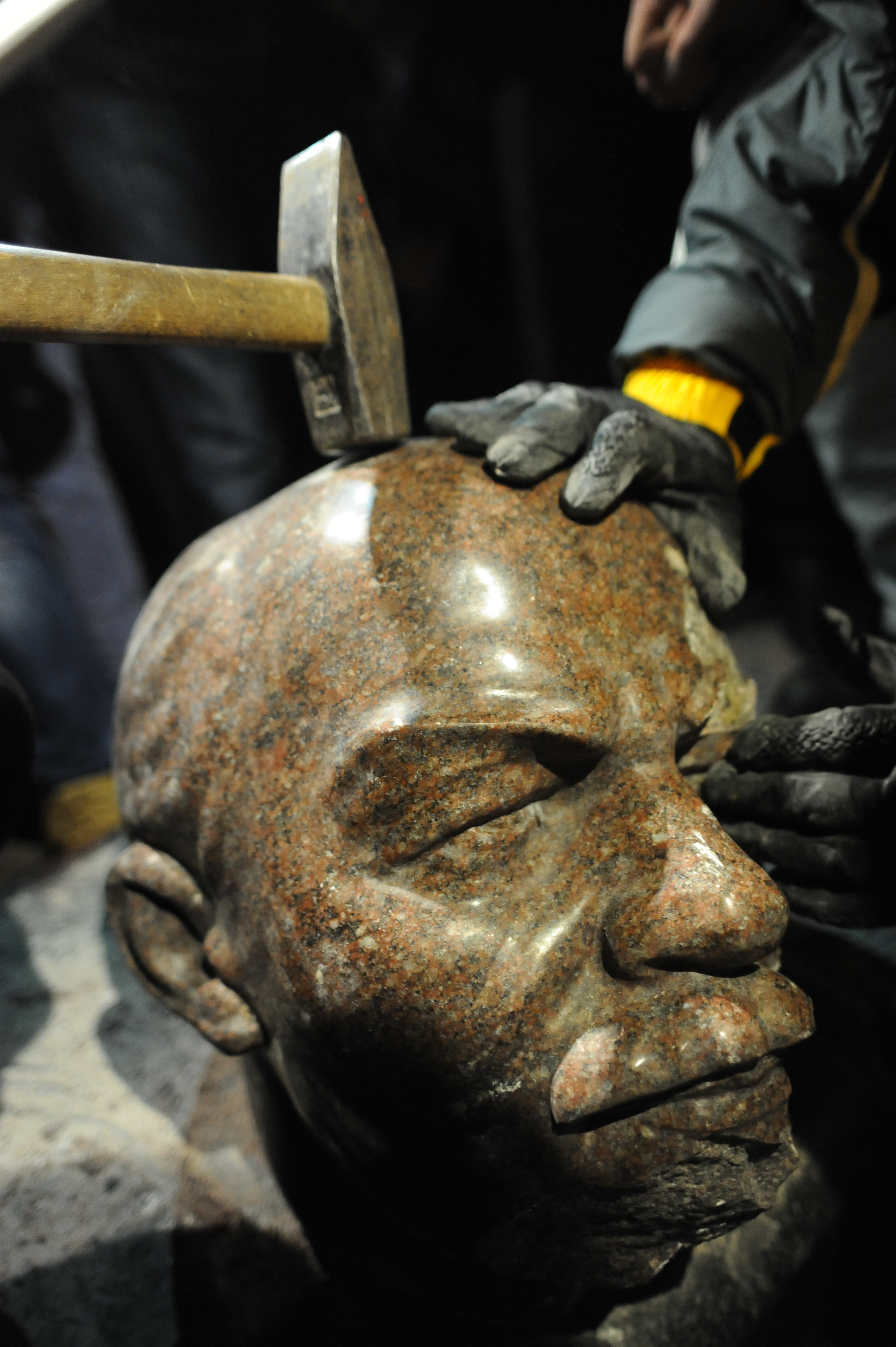 Protesters are about to hammer down the head of the overthrown V.I. Lenin monument. December 8, 2013.

Today, the Council of Economic Advisers (CEA) released a report outlining the opportunity costs of socialism on the macro economy, including standards of living, and the impact on the Federal budget.  Below is the executive summary.  Read the full report here.

Coincident with the 200th anniversary of Karl Marx’s birth, socialism is making a comeback in American political discourse. Detailed policy proposals from self-declared socialists are gaining support in Congress and among much of the electorate.

It is unclear, of course, exactly what a typical voter has in mind when he or she thinks of “socialism.” But economists generally agree about how to define socialism, and they have devoted enormous time and resources to studying its costs and benefits. With an eye on this broad body of literature, this report discusses socialism’s historic visions and intents, its economic features, its impact on economic performance, and its relationship with recent policy proposals in the United States.

We find that historical proponents of socialist policies and those in the contemporary United States share some of their visions and intents. They both characterize the distribution of income in market economies as the unjust result of “exploitation,” which should be rectified by extensive state control. The proposed solutions include single-payer systems, high tax rates (“from each according to his ability”), and public policies that hand out much of the Nation’s goods and services “free” of charge (“to each according to his needs”). Where they differ is that contemporary democratic socialists denounce state brutality and would allow individuals to privately own the means of production in many industries.

In assessing the effects of socialist policies, it is important to recognize that they provide little material incentive for production and innovation and, by distributing goods and services for “free,” prevent prices from revealing economically important information about costs and consumer needs and wants. To this end, as the then–prime minister of the United Kingdom, Margaret Thatcher (1976), once argued, “Socialist governments . . . always run out of other people’s money,” and thus the way to prosperity is for the state to give “the people more choice to spend their own money in their own way.”

Whether socialism delivers on its appealing promises is an empirical question. We begin our investigation by looking closely at the most highly socialist cases, which are typically agricultural economies, such as Maoist China, Cuba, and the Union of Soviet Socialist Republics (USSR). Their nondemocratic governments seized control of farming, promising to make food more abundant. The result was substantially less food production and tens of millions of deaths by starvation. Even if highly socialist policies are peacefully implemented under the auspices of democracy, the fundamental incentive distortions and information problems created by large state organizations and the centralized control of resources are also present in industrialized countries, as is currently the case in Venezuela. Lessons from poorly performing agricultural economies under socialist regimes carry over to government takeovers of other modern industries: They produce less rather than more.

These countries are examples of a more general pattern of socialism’s negative output effects. Such outcomes have also been observed in cross-country studies of the effect of greater economic freedom—quantified as an index of taxation and public spending, the extent of state-owned enterprises, economic regulation, and other factors—on real gross domestic product (GDP). This literature finds a strong association between greater economic freedom and better economic performance. It suggests that replacing U.S. policies with highly socialist policies, such as Venezuela’s, would reduce real GDP at least 40 percent in the long run, or about $24,000 per year for the average person.

It may well be that American socialists are envisioning moving our policies to align with those of the Nordic countries in the 1970s, when their policies were more in line with economists’ traditional definition of socialism. We estimate that if the United States were to adopt these policies, its real GDP would decline by at least 19 percent in the long run, or about $11,000 per year for the average person.

The Nordic and European versions of socialized medicine have been viewed as so desirable by modern U.S. socialists that they have proposed nationalizing payments for the healthcare sector (which makes up more than a sixth of the U.S. economy) through the recent “Medicare for All” proposal. This policy would distribute healthcare for “free” (i.e., without cost sharing) through a monopoly government health insurer that would centrally set all prices paid to suppliers such as doctors and hospitals. We find that if this policy were financed out of current Federal spending without borrowing or tax increases, then more than half the entire existing Federal budget would need to be cut. Or if it were financed through higher taxes, GDP would fall by 9 percent, or about $7,000 per person in 2022, due to high tax rates that would reduce incentives to supply the factors of production. Evidence on the productivity and effectiveness of single-payer systems suggests that “Medicare for All” would reduce both short- and long-run longevity and health despite increasing somewhat the population with health insurance.

study the communist manifesto it states that socialism is the doorway into communism.

You are correct. I have been in Socialist and Communists Countries, the Only people who benefit that kind of government are the Politicians, the average citizen is ALWAYS looking for food and over their shoulders to see who is watching them. Seems they are always on the look out, for what I don’t know, it was like they feared something.

John B Myers
Reply to  Donel

I totally REJECT this report for FAILING to include the horror examples of the results of trying to make socialism work – 100 million people (resistors) executed by multiple countries trying to make socialism work, starvation in some countries, rationing of health care and subsequent deaths for failure of the system to provide treatment in a timely manor, socialist/communist governments prevention of escape by citizens (North Korea, Soviet Union, Cuba), failure to name a single socialist country that was successful in making the failed ideology work, failure to fully describe the estimated cost of socialist programs and the source of funds expected to fund them.

Where they differ is that contemporary democratic socialists denounce state brutality and would allow individuals to privately own the means of production in many industries. –The difference is called Fascism. Fascism is just another form of socialism where the state does not own businesses, but controls them through regulations and intimidation. Germany under Hitler was socialist, where the state owned and controlled everything. Italy under Mussolini was fascist with the state not owning business but controlling them. We are heading more toward fascism. Either way, history has shown us that both are bad, since nothing in life is free and the cost in either case is lost productivity, individuality, creativity, identity and total subjugation of the population to the government and prison or execution for those who do not bend to the will of the government and ruling elite. Our youth have not experienced real hardship or the real realities of human nature and are being fed sanitized versions of history. Democratic leadership is exploiting our youth through the schools and colleges in order to gain power and impose either a socialistic or fascist form of government. It is time for us older folks to step up to the plate and stop this Democratic Party disaster.

You are absolutely correct & what a good written article!!

The idea of Free College and Free Medical for everyone sounds really great, but none of the Socialist that I have listened to have any idea of how to pay for all this Free Stuff. I would love for my grand kids to have a free College education and get Free medical for the rest of their lives but the question just keeps coming up, How and Who will pay for it? I heard one college student from California when asked who would pay for this Free Stuff he stated that the Government would pay for everything. When asked where the money would come from he answered, they have plenty of money, they can afford it. Now unless I have completely lost touch with reality the only reason the government has money is because me and just about every other citizen of this country pay taxes. Now the government does print money but I’m sure there is a limit as to how much they are allowed to print. Socialism does NOT work, it never has and it never will. These people keep pointing to countries like Germany and their free medical care, well a German can pay up to 40% income tax, based on information I received first hand from German Friends. For those of you who are Math challenged, if you have worked hard all of your life and made it up to the $100,000.00 level and got hit with a 40% income tax that would leave you with $60,000. Now I don’t know about the rest of you but I think I already pay too much income tax.

Communism makes as much sense as Ocasio-Cortez does! That’s why it fails every time it rears its ugly head! Liberalism is a mental deranged disorder. Pelosi, Waters.Vote Republican in Nov. to save our great country from being another Venezuela!

Ekssentially, the socialists/communists in America FAILED math. And they certainly do not get the correlation between cause and effect.
Thqt is why they voted for a flaming idiot in New York.

Well if you think allowing people from other Countries to tell us that they are coming here no matter what and disrespecting our laws and bringing their SH attitudes here just keep on voting Democrats into office and you will reap what you sow. This is why every Trump supporter must vote in November for Trump supported candidates. If you want these unhinged, Liberals, Leftists and Democrats to continue favoring illegal immigrants and criminals over American Citizens then vote Democrat. If you want a free, law abiding American without anarchy then vote for Trump candidates. Its just that simple.

Socialism is the philosophy of the lazy and the stupid….

Socialism is great until one has to start paying for it.

…..”Socialism is a Philosophy of Failure, The creed of Ignorance, and the Gospel of Envy, Its inherent virtue is the Equal sharing of Misery”……….WINSTON CHURCHILL,………..and know you also learn why the Communist hated him!!,….

…..”The problem with Socialism, is, that you eventually run out of others Peoples Money!!”…….MARGARET THATCHER.

wpDiscuz
16
0
Would love your thoughts, please comment.x
()
x
| Reply
You are going to send email to
Move Comment