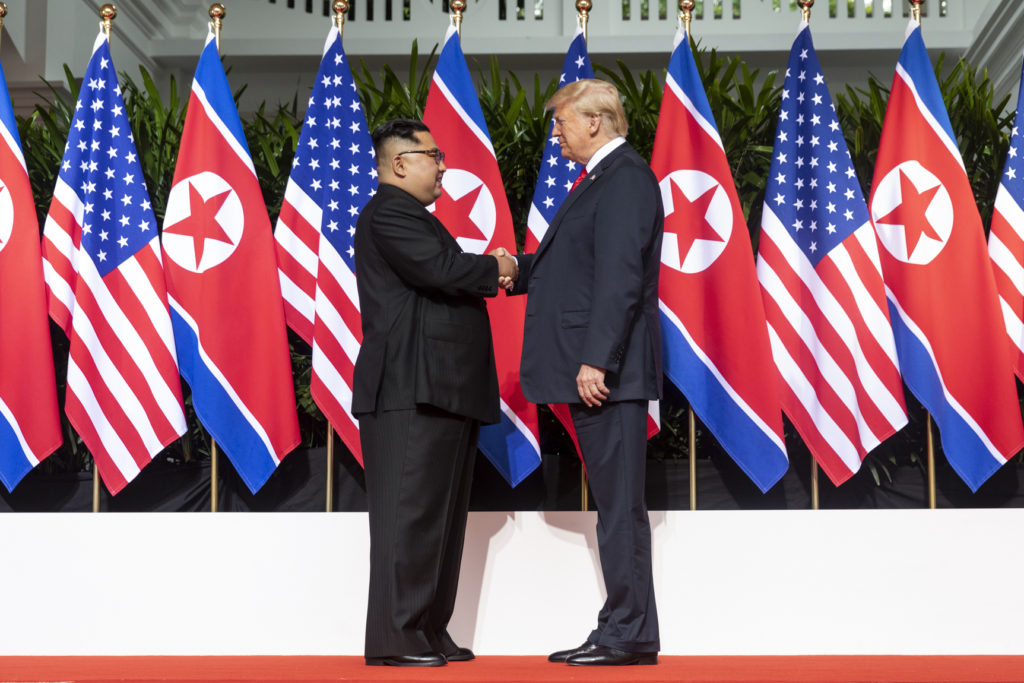 “President Trump and North Korean leader Kim Jong Un signed a document on Tuesday stating that Pyongyang would work toward ‘complete denuclearization of the Korean Peninsula’— a historic concession, which was one of the requirements the U.S. sought at the summit in Singapore. The historic agreement came after the two leaders held several meetings throughout the day.”

“After a historic summit that scored North Korean dictator Kim Jong-un’s signed pledge committing to ‘complete denuclearization of the Korean Peninsula,’ President Trump said Tuesday it was a great moment for the world. ‘We are prepared to start a new history and we are prepared to write a new chapter between our nations,’ he told reporters at the summit site at Capella Hotel. He ticked off a laundry list of concessions the U.S. won from North Korea.”

“North Korean leader Kim Jong Un promised historic change Tuesday while signing a letter to cap his summit with President Donald Trump in Singapore on denuclearization. ‘Today, we had a historic meeting and decided to leave the past behind and we are about to sign the historic document,’ Kim said. ‘The world will see a major change.’ He also thanked Trump for the summit.”

“It was just the first step on a journey that will be long if it doesn’t derail, but President Trump’s one-day summit with North Korean dictator Kim Jong Un was indeed a start. Kim ‘reaffirmed his firm and unwavering commitment to complete denuclearization of the Korean Peninsula,’ a statement said. In exchange, Washington ‘committed to provide security guarantees’ to the North. The sides will also work toward ‘stable peace’ on the peninsula, and Pyongyang will move to return the remains of all US soldiers who died there in the Korean War.”

“Make no mistake: The world should welcome Donald Trump’s bold move to engage Kim Jong Un. A lasting peace for the Korean Peninsula, if it can be accomplished at all, will take years to accomplish. No one should ever have expected that Trump and Kim could solve a decades-old problem in a single afternoon. The leaders of these two nuclear-armed nations are talking about peace rather than war, and Kim has taken concrete steps to sharply improve relations with all his neighbors except Japan.”

FORMER NATIONAL SECURITY COUNCIL DIRECTOR FOR ASIAN AFFAIRS VICTOR CHA IN THE NEW YORK TIMES: Trump and Kim Have Just Walked Us Back From the Brink of War

“Thanks to the creative Olympics diplomacy from President Moon Jae-in of South Korea, which teased the North Koreans out of their self-imposed isolation, and Mr. Trump’s impulsive decision to meet with the North Korean leader, Kim Jong-un, the world witnessed a historic meeting on Tuesday between two countries that have been sworn enemies for almost seven decades … Mr. Trump’s diplomacy, however unconventional, has pierced the isolation bubble of the North Korean leadership, which no previous president could do.”

“The U.S. and North Korea have now embarked on a course set for peace and prosperity, including not only the elimination of North Korea’s nuclear capabilities but also the recovery and repatriation of American POW/MIA remains. As President Trump said of the document he signed together with Chairman Kim, ‘A lot of goodwill went into this, a lot of work, a lot of preparation.’ … What we’ve seen during the past 48 hours is the reincarnation of a quintessentially American doctrine: peace through strength.”

FORMER STATE DEPARTMENT OFFICIAL PETER VAN BUREN IN REUTERS: Whatever Happens Next, the Trump-Kim Summit is a Win

“If Trump followed advice from the left he would have stayed home like past presidents. If he’d listened to the right he’d have bulled into the room and said ‘Lose the nukes, number one and we’re done’ and the process would have truly failed. North Korea developed nuclear weapons to guarantee its survival. If the United States and South Korea want the North to give up those weapons, something has to replace them as that assurance of survival. The summit created the platform. The key to what happens next is how Trump, Moon and Kim work to resolve that issue.”

“Last fall, President Trump and North Korean leader Kim Jong Un were trading personal insults and threatening nuclear war. Fast-forward to the Singapore summit, and the two men are smiling and talking on the Island of Tranquility. Just like that, peace broke out … Progress on other issues may follow, such as improvement in human rights and political reform, economic openness and perhaps reunification with South Korea. We will see. But the two men have given birth to a new world of possibilities that no thoughtful person can see as anything but good.”

WASHINGTON EXAMINER’S BYRON YORK: On North Korea, a President Who Tried Something Different

“So now the talks have happened, and North Korea has agreed — much like it has in years past — to denuclearize. Critics rightly point out that Kim and his predecessors never kept their promises before. On the other hand, these talks were the result of a series of events unlike those in the past. Maybe Trump’s plan will work. Maybe it will work a little and not work a little. Or maybe it will fail altogether. But it’s the result of a president re-thinking a problem that desperately needed a new approach.”