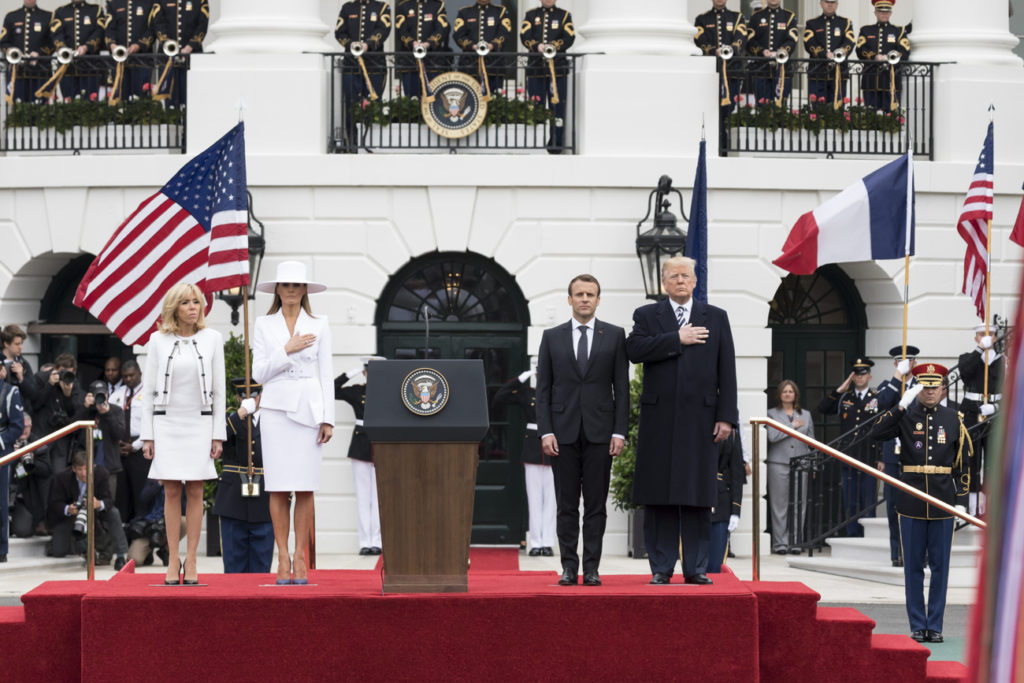 French President Emmanuel Macron had some tough words for President Trump this week, as the topic of trade caused our European allies to bristle. The French president threatened to exclude the United States from G7 agreements.

The American President may not mind being isolated, but neither do we mind signing a 6 country agreement if need be. Because these 6 countries represent values, they represent an economic market which has the weight of history behind it and which is now a true international force https://t.co/UA86fcjozs

While the issues of Iran and the Paris Climate Agreement represent disagreements, the root cause of the tension is trade. President Trump is responding to foreign tariffs, a longstanding issue, with American tariffs on European and Canadian goods.

Why isn’t the European Union and Canada informing the public that for years they have used massive Trade Tariffs and non-monetary Trade Barriers against the U.S. Totally unfair to our farmers, workers & companies. Take down your tariffs & barriers or we will more than match you!

In spite of the French President’s tough talk, he seems to have walked it back after meeting with President Trump on Friday at the G7 meeting. The two appear to be getting along well after some contentious tweeting this week. As of this writing, it isn’t clear if the reached a middle ground on trade, but Europe and Canada are supportive of American policy in North Korea, and are publicly supporting the president’s upcoming meeting with North Korean leader Kim Jong Un.

Pursuing the conversation. Engaging, keeping the dialogue alive, now & ever. Sharing, reaching out, always, to promote the interests of the French people, and all those who believe in a world we can build together. With President Donald Trump, prior to the opening of G7 Summit. pic.twitter.com/SD5hzLBO0X

Given how quickly the French leader changed his tone, it seems that President Trump’s approach is working.

RELATED: Why President Trump Is Standing Up To Allies On Trade

F**k the French and all the European countries. We need a trade war. We support everyone and then subsidize Europe so they will always have our money and we will go broke.

The French are quick to surrender.

our President KNOWS WHAT HE IS DOING, this is his CUP OF TEA AND HIS STOCK IN TRADE, MAKING DEALS.

Everyone involved in the G7 is fully aware of the past inequity in across the board trade between the U S and some nations. It appears to come from the fact that the U S has made effort to protect the entire world militarily and financially in the past. But we have reached a point where our nation is taking away from our people in order to continue these programs. Social security and medicare on the path to collapse, hard manufactured products, automobiles etc now operating in these other nations, our major cities like Detroit turned into slums for the most part demands that the U S take charge of it’s own in order to maintain the nation we once were. It appears that the president is on the right track.

AMEN, Mr President, America First and Always, God Bless America. However, fuel prices could interfere with the fall elections if not lowered from present prices. There is quite a bit of talk about this in our area.

If our trade with these countries is so imbalanced and needs to be changed, why not just put the information out there for the American public to see for themselves. Nothing complex about simple numbers

If you have to see everything before you believe it, maybe you should have been near those Towers on 9/11.

Trump knows of the paper tigers that he is dealing with.

Finally we have right president we suppose be happy of him: All Americans good citizens; accept stupid democrats leaders. Their never happy if is not democrat leader; because they’re do not care for country; only for money for their pocket. But the people European Union leaders from Germany and French began Bush administration their do every thing to opposed America; that way their make new valuate ” Euro” to put down American dollar , but this two country Germany and French cooking by them self. Their have more problems with economy then America. That way Mr. President Trump he is very smart he knows what he doing. But you communism leaders pseudo democratic if you make problems for Mr. President Trump you suppose be punish go to JAIL because you barking dogs you’re suppose be help to him to be better do for country; not for you self play for money using terrorist politico agency George Soros and Tom Steyer . You’re gov. employees You’re not Boss!!! President is you BOSS ! !! if you opposed to President, you suppose be fire from job right way or go to jail, if something is bad for country or American people. This is truth but you do not like truth democrats barking dogs nothing from them works.

This IS my President !