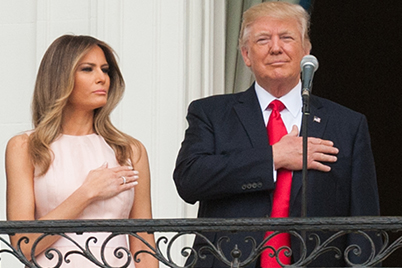 President Trump has enjoyed the support of a number of secret admirers, who may not like everything about the president, but do like what he’s doing. That number is growing. Fox claims a 45 percent approval rating, in line with the steady 49 percent approval rating he’s been getting from Rasmussen. But that’s not all.

A strong jobs report released June 1 showed the U.S. with a seasonally adjusted 3.8 percent unemployment rate.  The president seems to get some credit for that.  His handling of the economy brings his most positive job ratings, as a record 52 percent approve, while 41 percent disapprove.

Optimism is increasing on North Korea, as more voters now think it could be convinced to give up its nuclear weapons.  Twenty-eight percent feel that way, up 12 points from 16 percent three months ago (March 2018).  Still, a majority, 60 percent, says North Korea won’t let go of its nukes. By a narrow margin, voters think war with North Korea is less likely than it was two years ago (33 percent less likely, 28 percent more likely, 35 percent the same), and most approve of the president meeting with North Korean dictator Kim Jong Un (66-24 percent).

The bottom line is the President Trump’s performance on economic issues, foreign policy regarding North Korea and restoration of America’s position in the world are enabling more people to publicly support him. As his successes are starting to pile up, even if his personal approval doesn’t increase because of social pressure from the Democrats and the media, he is still winning in the eyes of the American people. Polls like this are welcome news to a country that does want to be great again.

I expect the Meekster from Morning Joe on Msdnc to implode any day!!!

HEY BOSS! WANT TO DRIVE THE DEMOCRAT RINO RAT COMMUNISTS CRAZY? NEXT TIME YOU AND THE WIFE HEAD TO THE CHOPPER LET HER HANG ON YOUR ARM AND BOTH OF YOU LAUGH LIKE LITTLE KISSING KIDS. WATCH THE SUICIDE RATE CLIMB. PARDONS, OBAMA PUT INNOCENT GI’S IN PRISON FOR SHOOTING BACK. PLEASE REVIEW SGT EVAN VELA AND SGT DERRICK MILLER PLUS THE FT. LEAVENWORTH 10. THEIR FAMILIES ARE BROKE WITH NO BENEFITS. THEY WERE GIVEN THE SAME SENTENCE. I KNOW IF YOU SEE THIS, YOU WILL DO THE RIGHT THING.
SPIRIT OF AMERICA PARTY RADIO SHOW.

45% APPROVAL BY THE COMMUNIST MEDIA? MY POLES STASHU AND WANDA SAY 65%

That would be more in line with his actual approval ratings. The Libs are quaking in their boots as to what November will bring. They always mock his skin tone and call him an orange Cheetos. So let us name the Conservative wave the “Orange Wave”. It is coming and they will feel the wrath of the American people who are sick and tired of this band of worthless fools!
MAGA

Re the President’s poll ratings. I think that the nonstop and intense/frenzied anti-Trump message in the media is worth at least 15 points. To me, if his approval rating is 49%, it’s really at least 64%. I think that a lot of those that “disapprove” don’t tell the pollster the truth, because the message is “what kind of idiot supports Trump?” Also, I think a whole lot of people are turned off by the nonstop Trump hatred.

Imagine this nation backing fully President Trump how great this country can be! Imagine no anti-American agendas of the democrats and those democrats disguised as republicans in corrupt Washington d.c of all past administrations and their tool the anti-American medias and liberals, snowflakes, and the people of Hate Hollywood liberals! Beware the bought out biased medias propaganda LIES and corrupt politicians ! You Americans especially white should Stop the liberal lowering of standards to pacify anyone and anything it hurts all! Imagine how great and far this country could be if all back a fellow American as President of the United States of America with patriotic pride and in “GOD We Trust’ instead of the liberal left and some liberal right’s use of the medias to divide this country to destroy this country from within just like the terrorist want! America is a very young country compared to many others and has gone far and is still a experiment fir all peoples to have rights and seek the persuite of Happiness and prosperity!

I and my family will be voting for the president all the way down. But I’m not taking the democrats lightly. These guys have shown in the past that they will do anything to try to bring the president down. It hasn’t stopped since he took office. Everyone who has supported the president in the past had best get out and vote in 2018 AND 2020. Otherwise everything he has done for the benefit of the nation will be reversed and taken down. Pelosi, Schumer, even Obama himself will be out there doing all they can to sabotage the president and his agenda. WE cannot go back to the old garbage they threw at us before. We absolutely must keep moving forward and bring this nation back up to standard.