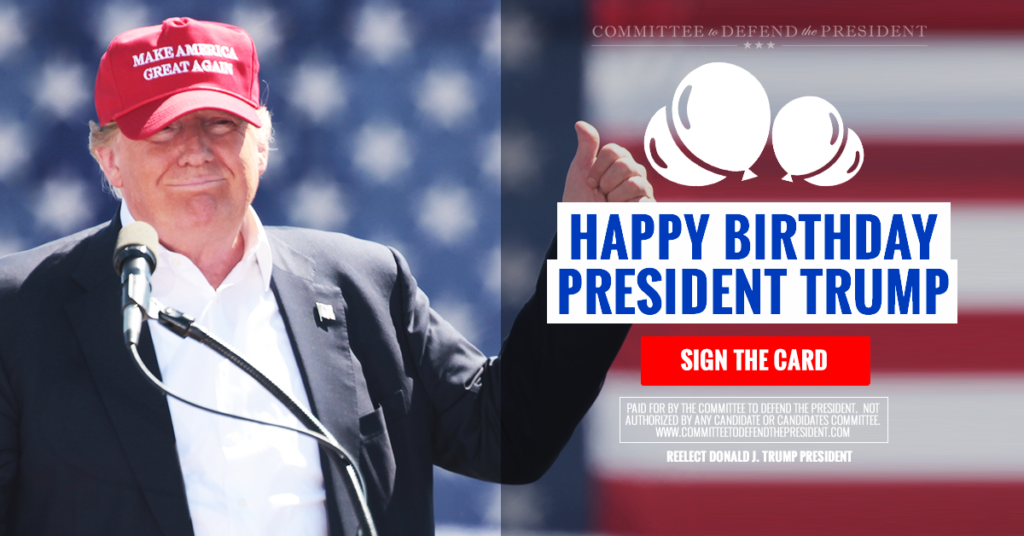 RESTORING RULE OF LAW: By appointing rule-of-law judges and enforcing immigration laws, President Trump has reshaped the judiciary and is restoring rule of law.

REDUCING THE BURDEN OF GOVERNMENT: President Trump’s policies have reduced the size of government, and promoted individual liberty, creating space for the economy to grow.

Don’t worry, the majority are behind you. We’re just more quiet & civil than the left. You’re in prayer

with all the love and respect a man can hold in his heart for the greatest President this Country has ever seen, ben with you from the beginning, Happy Birthday1!!! & God Bless!!!!!!!!

God Bless You President Trump and Thank You for making all these Positive Actions for Our America.
Making America Great Again and Better than Ever Before.
Prayers sent for Your Safety and Success.

we will stand with you Mr President.

Thank You for Standing Up For
AMERICA AND AMERICANS

Wishing you a very happy and healthy 72nd birthday on June l4th. Thank you for everything that you have done so far to MAGA. We, your supporters, appreciate it so much.

Unfortunately, all the unappreciative ingrates will still reap the benefits of all the great things that you have done. When we raise the bar, they just go lower.

God bless OUR PRESIDENT!!! We are totally with you, sir, and have your six. May you enjoy the happiest of birthdays!

President Donald Trump, Happy Birthday, Stola, and God bless you, guide you and strengthen you.

I appreciate your candor and all you do for our country and religious freedom. I so appreciate this comment box, if only you could expand it to all other comment boxes, so that we would no longer need Disquis. Disquis has disabled commenters comment boxes and now blocks access unless they agree to some wacky “new terms.” Keep fighting for our freedom of speech and squash those who censor free speech among conservatives. Thank you, dear President

Wishing you a very happy birthday, President Trump. Hoping Melania and yourself take a few quiet moments “away from the madding crowd” to celebrate.

As our 45th President, your achievements have been unprecedented, especially considering the howling and hostile “head winds” you are facing everyday. Now, THAT is courage! May God continue to bless you, and be the Holy Gale Force Wind at your Back propelling you ever forward. We love you, Sir.

Dear Mr. President, SIR ___ ie “Reducing the Burden of Government”…
PLEASE, SERIOUSLY, CONSIDER ELIMINATING NSA , Period <<< ie John Bolton. PLEASE. WE Really Do NOT Need NSA, that Dept IS
Already 'covered'. << BOLTON is the Worst For >Protecting Sovereign’ USA/ YOU / ME /E’ONE of whom ARE NOT
the Left, Globalist , NWO, War (blood) Mongers.
> BOLTON ‘circled the wagons’ at Mar-a-lago plenty of times, just waiting.
HE IS WAY WORSE than McMaster. ( & mickeymaster (uncle fester) sorry, but not really) Was bad enough) HE BOLTON (TOP level) INFILTRATING the
WH. & ‘playing’ w/ Your Brain. & ‘KNOWS it’ SIR.
> EX: BOLTON ‘dragged’ GWB into IRAQ,etc. need i say more ___
> Figure out ‘a way’ SIR. BOLTON HAS GOT to GO. Clean his desk & move on
to where he was before he ‘sinkered’ this jobbee. Someone Said this & perhaps quite noteworthy at that:
>>> UPDATE: Trump told Kim “you have nukes, but ours are massive”. Kim should have fired back: Yes, but if you nuke me, you hit 3 goats and a cement mixer. If I nuke you, I take out Google! Please. Oh please. ps. & let me add ‘Bohemian Grove’ N.Ca. hmm
> per Your Letter to MR. Kim – 0nly 1 remark i saw on your twitter Was Correct ie ink/PHOTO re Bolton. WHY??? IS E’ONE including Fox giving BOLTON a ‘free pass’ ??? MR. KIM forgot re Bolton & was ‘snide’ re PENCE for using the ‘LIBYA’
word. ( & You did too, as well). Sooo, that’s about it. & Hope ‘this’ gets Somewhere. BTW: saw photo of BOLTON (bastard ) W/ ‘white Hair’ to match his ‘tache broom’ – whatever. Since then, Hair dyed w/White broom hanging on his ‘dirty upper lip’ . GET a Haircut / Shave, would ya. Geez, hope this gets inked in Total. GOD BLESS YOU, SIR & USA. Thank you.
>ps. i’ll ink a Real Good Birthday Wish Soon.

Hey all we need to do our part and give President Trump some support in the mid-term elections.Imagine what he could accomplish with support and look at what he has done with any support for most part.

A very Happy Birthday and a very successful mid-term elections. We cannot let Dems get power. It will ruin all the good already done and all the good still to be accomplished.

when the shooting starts,and it will,I will be right behind president trump 100% ,i have been with america and against communisim all my life. socialist/marxist demon-rats all need to spend some time in cuba,venesuwla ,latvia,russia.any of the rat infested “african”shy-holes. and learn what the definition actually is.AND PLEASE FIND SOME OTHER TREE FOR THE ATTNY GENERAL TO SLEEP UNDER. LIKE GUAM…