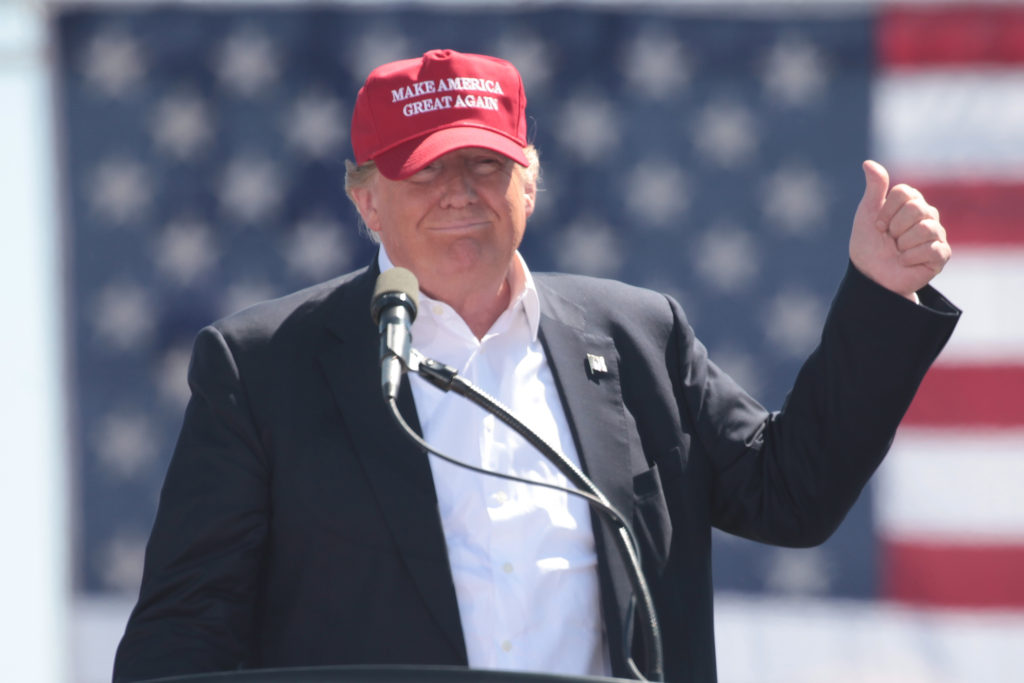 “America is a nation of believers, and together we are strengthened by the power of prayer.”

A VOICE IN THE WHITE HOUSE: Today, President Donald J. Trump signed an Executive Order to ensure that the faith-based and community organizations that form the bedrock of our society have strong advocates in the White House and throughout the Federal Government.

PRIORITIZING RELIGIOUS FREEDOM: President Trump has made it clear that religious freedom is a priority throughout his Administration.

ONE NATION UNDER GOD: President Trump has publicly stood with people of faith and with those who advocate for the sanctity of life.

PROTECTING RELIGIOUS FREEDOM: Throughout his tenure as President, Donald Trump has been a champion for religious liberty in the United States, restoring the ideals that have undergirded our Nation’s freedom and prosperity since its founding.

PROTECTING THE SANCTITY OF LIFE: The President has been one of the foremost defenders of the sanctity of life in the history of the White House.

Go President Trump you are definitely fulfilling the desires of main stream America!!

Way too much interfering in religious matters here. Religion is a private matter.

Richard, I do not believe the President is interfering with religious matters here, He is only giving back what the Obama and his cronies took away.Be thankful we have a President who actually cares for America.Big contrast from the 8 years of Obama.

These people will have to face God for this someday. Glad not in their shoes.

Easiest solution to abortions. Invest $$ in scientific research to provide proof a fetus has all of the senses at an earlier stage than current accepted societal thought.

Abortion is murder, every time.

Gov Herbert is barred from instructing his dept staff of striking, vacating, altering, or other these preamble secured blessings for any mental illness or other murderous needs.

I have filed a fed. case: Schmidt v. Gov Herbert, Case no: 2:18-cv-00311-DAK asking a jury to affirm the born and unborn have unlimited secured blessings of liberty as equal American citizens.

I am for every thing u are president Trump so for. keep it up Mr president keep lesson to the most High and u want louse because every thing GOD is for, the Demerits is totel not for it at all .the Demerits are for same sex marriage ( not GOD ) abortion (not GOD) pray in and out of season (not the Dem). Keep up the good work .And mass up please GOD bless u

I mean dont mass up ok

This also gives freedom to Muslims. People need to consider this.

YOU TUBE SAVE THE KIDS ABUTOM.
YOU TUBE ABORTION IS MURDER ABUTOM

If a pregnant lady wanting to have her baby was attacked . Causing her to have a mis-carriage. When the assailant was caught. That person person would be charged with murder. Which is a good thing. But a women not wanting her baby might be further alone in her pregnancy , than the first pregnant women. But then she decides to have an abortion. And it is legal. Not by choice = MURDER. Choice = abortion . Either it’s a life or it’s not. And I say that it is!!!!

Abortion stops a beating heart. There is no justification for taking a human life.

“Democrat norms.” Let’s see a glimpse of what they are: 60,000,000 babies murdered in cold blood; destroying the once most prosperous cities and states in the nation; suing little towns for displaying manger scenes at Christmas time; teaching the fairytale of evolution to our young children; and literally trashing every moral absolute that has sustained the human race through time! This class of immoral human beings will die marring everything they put her hands to. And the buffoons cheer her on. It’s like certain apostate Christians giving their applause to those they believe will face the flesh searing flames of hell, when the Bible fact remains that this world and everyone who held to its sins “will be ashes” after all is said and done (Eze.28; Mal.4). Pagan philosophy in all its forms will destroy this world. But GOD will restore what sin has done to mar His creation. And when “the saints” witness the end result, the greatest joys of life will begin.

Religious Freedom is a right that is in our Bill of Rights! Our previous administration has ignored this; for a Christian, that means being able to share our faith, and to do business according to our faith. No American Christian should ever lose their job or go to jail in this country, because of their faith!

Yeah, let’s stop it so things like this can keep happening.
A 12 year old girl was raped, forced to have the baby, and forced (by our wonderful court system) to share custody with her rapist.
She is forced every day of her life (at least until the child turns 18) to see her rapist and interact with him. What a wonderful Court system, NOT!

I am most surely opposed to abortion, but Trump is hardly the person who supports life. He was not against abortion before he was nominated. There are many difficult issues. We cannot lift him as a hero just because we may agree on one issue.

You should be glad YOUR mother didn’t have YOU aborted! Shame on YOU!

wpDiscuz
20
0
Would love your thoughts, please comment.x
()
x
| Reply
You are going to send email to
Move Comment