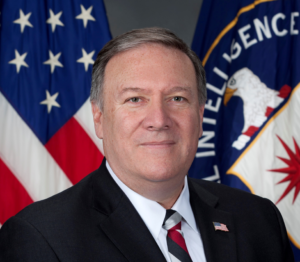 Editorial boards have come out in force to support the nomination of Mike Pompeo to be Secretary of State, highlighting his ability to work with Congress, his “knowledge of the world,” his vast experience, and his stellar credentials.

THE WALL STREET JOURNAL: Who Needs a Secretary of State?

“Mr. Pompeo is a West Point and Harvard Law graduate who served three terms in Congress, and along with fellow Republican Tom Cotton unearthed the Obama Administration’s secret side deals with Tehran. He has invigorated the CIA clandestine service, tried to give Mr. Trump options on North Korea, and has gained the President’s trust.”

CHICAGO TRIBUNE: Why the U.S. Senate Should Confirm Mike Pompeo

“That stands to change under Mike Pompeo, a veteran of Congress who has served Donald Trump as director of the CIA…. Pompeo knows well how to work with both Congress and the president — who trusts him so much he sent him on a secret mission to Pyongyang to meet with North Korean leader Kim Jong Un.”

“Mr. Pompeo should be deployed to Foggy Bottom in the hope that he will fulfill his promise to revive and reassert U.S. diplomacy.”

“Unless a nominee has clear ethical or competency failings, presidents should be accorded wide latitude to select top aides whom they trust and agree with. Pompeo passes that test and merits approval.”

PITTSBURGH POST-GAZETTE: Pompeo’s Promise: He is Bound to Rebuild the Diplomatic Corps

“Given the importance in the conduct of foreign relations of presenting a consistent position to countries around the world, America will be better off if Mike Pompeo is confirmed as secretary of state…. Most important was the fact that Mr. Pompeo pledged to oil the machinery and replace missing parts of the Department of State. He seems dedicated to putting it once again in the business of formulating America’s foreign policy at home and conducting it with America’s friends and enemies overseas.”

“Pompeo also has solid knowledge of the world, [and] the discipline to oversee complex diplomacy…  Confirm him.”

“Shaheen, for all of our differences, has been one of the grown-ups in Washington on foreign policy. Yet she will not support Pompeo, a distinguished and qualified foreign policy heavyweight, because he is a conservative…. As CIA director, he has been a professional, demonstrating his competence and qualification to be secretary of state…. Pompeo deserves Senate confirmation.”

“Mike Pompeo is qualified to be secretary of state. There is no doubt about that. He is competent — as director of the CIA, he has managed a complex organization deftly, winning the respect of intelligence professionals… He is experienced… he has served in Washington, initially as a congressman, since 2011. He is highly credentialed — he graduated top of his class at West Point and went to Harvard Law School, where he edited the Harvard Law Review.”

WASHINGTON EXAMINER: A Soldier then a Spy, Pompeo Now Must Don the Diplomat’s Hat

“We hope the Senate will approve CIA Director Mike Pompeo’s appointment as secretary of state… Diplomacy and America First can go together. We think Pompeo — both a tough guy who has Trump’s respect and a smart guy who understands how hard and how crucial geopolitics can be — is the man who can arrange this marriage.”

THE WEEKLY STANDARD: Party Over Country

“There is no question Pompeo is qualified. He graduated from West Point at the top of his class. He served as a tank officer in the U.S. Army and patrolled the Berlin Wall before its fall. He went to Harvard Law School and was an editor of its famous law review. He built a successful business and, after his election to the House of Representatives from Kansas’s Fourth District, established himself as a leader on foreign policy and national security issues. He served three terms in Congress, and then Trump picked him to run the Central Intelligence Agency…. Pompeo is a smart, thoughtful leader who has the trust and the ear of the country’s president. He’s used his influence to shape Trump’s thinking on such difficult issues as Iran, Afghanistan, Syria, and North Korea.”

SHARE THIS WITH YOUR FRIENDS:
Tags:Defense, Mike Pompeo, President Trump, Secretary of State

For those of you, who do not use your brain that God gave you to think with and vote for Pompeio, who is the most qualified person for the job and is more qualified for that position than anyone else. If you do not use your brain that God has given you, He may take it away from you and throw you into Hell immediately, because God knows there are plenty of people like Pompeio, who will use their brains for God’s masterful things involved in the Christian behavior of America. God is the only one who knows best who is qualified for the position that Trump is appointing Pompeio for and those who try to not vote for Pompeio to be elected may be thrown by God into Hell throughout eternity!

All I Can Do IS, Send Positive Energy Thoughtforms for Confirmation of Mr. Mike Pompeo to Serve as USA Secretary of State. & Thank You in Advance.
smz/mi

An honorable man to serve our beautiful country, who has impeccable credentials. America and its citizens are fortunate to have a man of integrity craft and weave this into all of the diplomacy, good will and leadership necessary working with other countries at this time in world history.

MIKE POMPEO WILL BE A GREAT ASSET. AS SECRETARY of STATE..