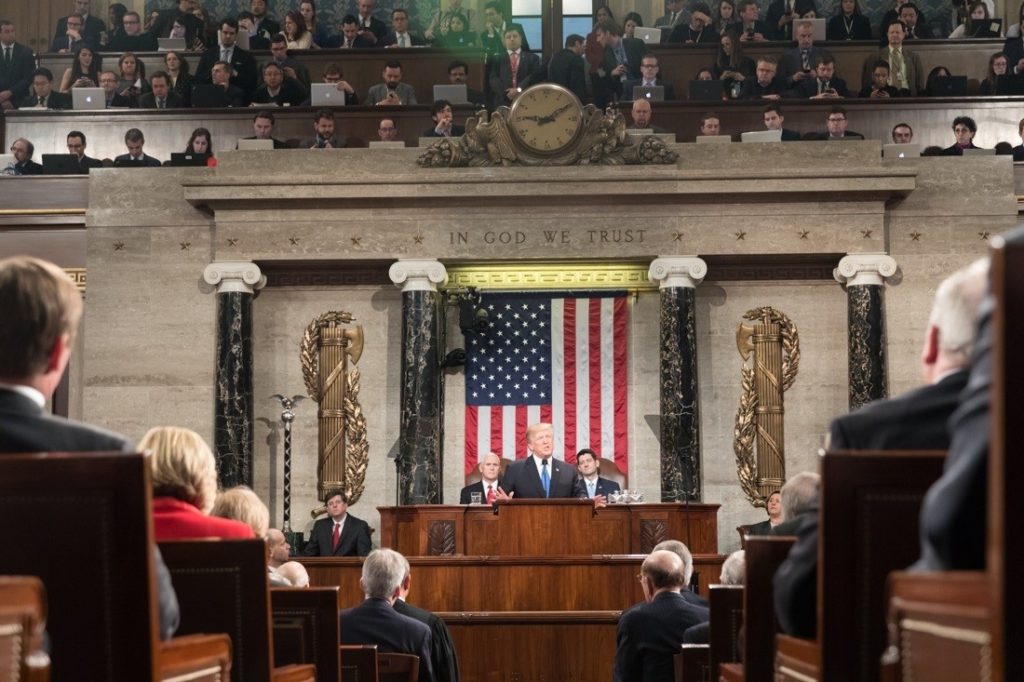 Senate Majority Leader Mitch McConnell (R-KY): “Rebuilding America’s #infrastructure is a critical issue that @POTUS, his Administration, and Congress are continuing to work to achieve together.”

House Majority Leader Kevin McCarthy (R-CA): “America is coming back. With more Americans working and the future finally looking up, Congress will continue to work with @POTUS to lay the foundation for decades of continued prosperity. #Infrastructure”

Senate Environment and Public Works Committee Chairman Sen. John Barrasso (R-WY): “Republicans in Congress are eager to answer President Trump’s call to address America’s aging infrastructure and the outdated rules and regulations that drive up costs. Democrats must now keep their commitment to achieve these goals. It’s time to work together in a bipartisan way for the American people.”

Sen. Dan Sullivan (R-AK): “I applaud President Trump and his administration’s continued focus and commitment on infrastructure – which I believe presents our nation with significant bipartisan opportunities – especially as it relates to permitting reform and growing our economy.”

Sen. Rob Portman (R-OH): “I’m pleased that President Trump is coming to Richfield to talk about the need to rebuild America’s aging infrastructure. As I’ve said before, the President’s plan is a good starting point for discussion, and I’m hopeful both parties will work together on this issue.”

Sen. Jim Inhofe (R-OK): “The president was exactly right today—we need a sweeping infrastructure proposal to rebuild our nation’s infrastructure. A major infrastructure bill is more than just legislation—it is an investment in the economic future of individuals and communities around the country. We know the benefits: an increased GDP, stronger economy, higher wages and skilled jobs.”

Sen. Dean Heller (R-NV): “The President is right. We must work together to update our failing roads & bridges. As a member of @SenateCommerce & @GOPSenFinance, I’ll be working w/the White House, @SecElaineChao and my colleagues to upgrade #NV’s infrastructure & bring this country into the 21st century.”

Sen. Shelley Moore Capito (R-WV): “Great to hear @POTUS share his vision for #InfrastructureInAmerica today. This is an opportunity both to rebuild our roads & bridges & to build a brighter future for our country through #broadband & other important investments. Look forward to working together on this priority.”

Senate Committee on Commerce, Science, and Transportation: “Today @POTUS addressed the need for #InfrastructureInAmerica as part of his speech in Richfield, Ohio. Our committee will be continuing the conversation and working on legislation next month.”

Rep. Doug Lamborn (R-CO): “We need to reform the processes that are holding projects back.”

Rep. Todd Rokita (R-IN): “[email protected] is right! It’s time to put our country first by investing in our great nation! I will keep fighting alongside @RealDonaldTrump to make sure we make choices that benefit all hardworking Hoosiers and American families and keep them safe!”

Rep. Dan Donovan (R-NY): “While surrounded by hardworking Americans, @POTUS again made clear that it’s time to rebuild our nation’s infrastructure. Investment will create jobs, grow the economy, raise wages, and modernize our transportation systems to improve communities throughout the U.S.”

Rep. Bob Gibbs (R-OH): “Looking forward to hearing from @POTUS on his #InfrastructurePlan! We will invest in American workers, reform the redtape and regulations, and rebuild our roads, bridges, and public utilities.”

House Energy and Commerce Committee: “Our committee has been working on solutions that fit @POTUS’s #infrastructure vision.”

House Natural Resources Committee: “From the start, @realDonaldTrump has ensured environmental review and permitting process for infrastructure projects is coordinated, predictable, and transparent.”

Secretary of the Interior Ryan Zinke: “President Trump is a builder and he knows that infrastructure is not merely an expense, it’s an investment in America. Every dollar we put into rebuilding our roads, bridges, transmission lines, and pipelines will bolster the economy. At Interior we have tens of thousands of miles of roads and bridges, pipelines, trails, docks, and more. We also are responsible for permitting infrastructure projects whether they are on federal lands or not. Between investing in our public lands infrastructure to rebuild crumbling roads to streamlining the permitting process, we are supporting President Trump’s modernization of our nation’s infrastructure.”

Secretary of Agriculture Sonny Perdue: “The bold #infrastructureinamerica agenda from @POTUS is necessary to increase productivity and boost the economy for all Americans, including the agriculture sector. A quarter of the new federal dollars will flow to rural communities.”

National Association of Manufacturers President and CEO Jay Timmons: “Like tax reform, a significant investment in our nation’s infrastructure has the power to supercharge manufacturing in America by improving our competitiveness while also making our families and communities safer. The administration has already delivered on some important permitting reforms, and the president’s call for a substantial $1.5 trillion investment is the kind of leadership manufacturers have wanted for a very long time.”

SHARE THIS WITH YOUR FRIENDS:
Tags:Infrastructure, MAGA, Ohio, President Trump

The absences of Establishment and RINOs from that list is a glaring swamp problem that needs cleaning in the next elections.

Today I talked to a man who was a steel worker in Lorain, Ohio and he’s excited because the mill here is talking about making it ready to re-open. Trump was in Cleveland a couple days ago talking about infrastructure and the mill was mentioned about how much it would cost to get it up and running again. This man said he lives here in Lorain and is tired of traveling so far to work for only $9.00 an hour. He says he will be in the first ones to be called back. Our residential streets here are in very bad shape also. We have a lot of pot holes and broken pavement to where you have to dodge around them while driving. This man said he saw a woman in a Lexis with four flat tires driving down the street. This is bad. There are streets you dare not go down.

We need to rebuild America, First! Hopefully these jobs will bring the US back to being strong and number 1 in the world again.

We need an accounting from the Obama Democrats as to where the last $760B of infrastructure/ shovel ready jobs was “pissed away” !!’nnnn

Need to also get the 80 trillion $$$$ back Obama and killary stold from America!……